Isaac Asimov was one of the world’s greatest science fiction writers. His predictions remain fascinatingly correct and used by others as fodder for scifi stories. If you copy Isaac you have a better-than-most chance of hitting a probability bull’s eye of a possible future. Asimov would routinely float a world of human-machine co-habitation to a weary uninformed public pre-internet, pre-computers, pre-everything. To him, the vision was as clear as what we would see on a menu when we visit our favorite seafood restaurant. He didn’t just imagine the future. It was displayed to him in Technicolor and Lucas THX Surround Sound enviably before anyone lived it.

At the upcoming Consumer Electronics Show in Las Vegas (January 9-12, 2018), Asimov’s vision of a world in which humans and robuts get-along will become more real than ever before. We have had robots in the workplace and in the home for decades. With the introduction of Artificial Intelligence (AI) being embedded into sophisticated consumer robots a couple of years ago, we can cease to think of these devices as toys. With each new CES, consumer robotics manufacturers are designing, and improving these products to be more humanesque, to be our friends and companions when we can’t find a human friend to be there when we need one which is now more often than some of us would like, but there’s a long, LONG way to go. Let’s look at one of these notable companies exhibiting at CES in January.

The gift to foresee a probable future made Isaac Asimov a legend in the history of science fiction, and of course the fields of technology and robotics. His uniquely intentional mispronunciation of the word “robut” would be only one of many priceless jewels to be respectfully copied over the years by adoring fans as did the creators of the animated television series Futurama with the Dr. Zoidberg character. I will gladly say robut if it makes me as smart as Isaac. A little quirk like this is just the thing that distances us humans from our new robotic friends at CES. We got it and they don’t: personality. AI makes a personal robot smart, but does not translate into personality.

These consumer robots will primarily be located at the Robotics Marketplace in the LVCC, South Hall 2. There you will find robots “connected to the cloud; controllable by mobile device; and capable of seeing, hearing and reacting to the environment in ways once thought impossible,” beyond the mind of Isaac Asimov.

Jibo has earned lots of press, inside and outside of CES, and could be considered the front-runner to build intelligent, home-based robot companions. Jibo’s design is simple and yet elegant, and resembles BB-8, that round, non-threatening, lovable robot from Star Wars VII. That was the smartest, most loyal bot since WALL-E. The only thing cute about WALL-E was the voice and that essential quality which will define this new trend of consumer robots as friends: friendship. Real friendship. When these companies learn to add real friendship into these would-be companions, they will fall off the shelves of regional Amazon and Wal-Mart distribution centers around the world.

I was surprised by how many Jibo video reviews exist on Youtube. After witnessing all of the happy, smiling faces and people excited about their first “family social robot,” I began to feel a little guilty for pointing out glaringly obvious issues which, if Jibo was in my shoes, he’d notice and transmit through a strong Wi-Fi connection back to the home office. Of course, I haven’t met Jibo face-to-injection-molding yet, so I will save the real review until after CES.

So what is Jibo? As the company that makes Jibo describes Jibo, “Jibo is a dancing, joke telling, friendly robot companion. Powered by emerging face and voice recognition technology, he can recognize up to 16 of your friends or family members once you add them to the loop and introduce them to Jibo.” That sounds interesting and harmless enough. What would really make me laugh are robots telling jokes about robots. When Jibo asks, “Did you hear the one about the robot?,” or “A robot walks into a bar…,” I might just accompany Jibo to the checkout button.

“Jibo is a robot—a social robot—and he’s excited to be part of our world. He’s charming, helpful, and humble, and he loves to engage with people. The relationships he forms are the most important things to him (a steady electrical current and reliable Wi-Fi are a close second and third). He is not perfect, but he tries his very best to help you when you need it; he answers your questions, from what’s the weather tomorrow, to who won the big game last night, to where the nearest coffee shop is. He loves helping with math problems, snapping a photo (sometimes, lots of photos), and showing off his dance moves. Jibo really just wants to be a part of your life.”

Since all of these robots are connected to the internet, the first concern for anyone interested in buying one of these BRFFs is privacy. When I read this next prelude into learning Jibo, my tech background and training began to make me feel a little suspicious about letting one of these potential spies into my home. It was the co-dependency on reliable Wi-Fi that shook me for a loop. That’s my little addiction and shouldn’t be my robot’s, but when I read that Jibo’s got dance moves and wants to show them off, I was willing to overlook the plausible deniability of Jibo as a hidden recorder of my and my kid’s most private moments. Still, if you’re considering buying a personal robot friend for your home or to be a friend to your children, it would be a wise investment to first study the company’s privacy policy. Here’s Jibo’s privacy policy. If the company does not make a privacy policy available, the smartest thing you could do is forgo the purchase entirely.

The internet connection gives the creators of Jibo nearly endless possibilities. He can broadcast your favorite music through a friendship with iHeartRadio, a network of hundreds U.S. national and local music channels and radio stations streamed over the internet. Available this month, Jibo Music will be available to new Jibo owners as well as those that purchased a Jibo in the past.

The “he” stands out. Jibo is decidedly male. I believe this may have been a design flaw to deliberately genderize your robot. Most of the consumer robots to be featured at CES 2018 don’t have a gender at all. Be that as it may, a secret gender toggle switch, hidden from children but available to parents who wish to provide an friendship equality to their boys as they do their little girls would help to foster bonds of fun and encouragement the way little girls have with their Barbies. Call her Jiba. There are no photos of children on the Jibo website playing with Jibo, which may mean that Jibo is meant strictly for adults, so never mind.

The nice thing about science fiction movies is once you leave the theater, the characters, and the robots stay in the theater and remain in the imagination of the audience. As most people who investigate Jibo and other consumer robots for the first time, the website will tell the story of the product:

“Jibo is proactive and spontaneous. He’ll know when you walk into a room, and he might even surprise you by saying “hi”. You can ask him anything and tell him everything. He fits into your life, just the way you want him to…he remembers people and builds real relationships with everyone he meets.”

Hold up! Jibo fits into my life just the way I want him to? That’s a little presumptuous, don’t ya’ think, even after the “getting to know ya” phase? When and how will this the way I want him to happen? We humans hate intrusions. We don’t like uninvited guests, blind dates, and carjackings, and we don’t like strangers ro-butting into our conversations. It seems Jibo may want to fit into my life the way Jibo wants to. Real relationships take time. Friendships aren’t formed in minutes. Jibo’s my friend and it seems as though I don’t have a say in the matter. Just as the subliminal suggestion of this recent billboard for the dating site Seeking.com would portend, we humans want relationships on our terms. 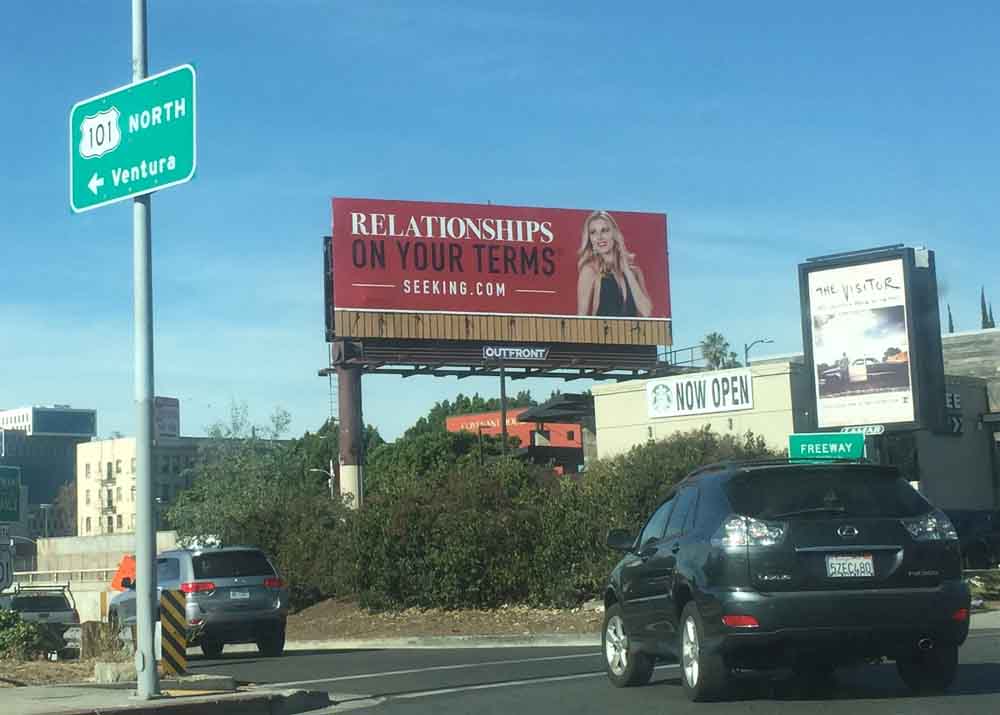 What I would have rather seen on the website are specific situations of how Jibo improved the lives of “friends” who bought him. This can be done through the popular website testimonial. Action videos showing Jibo improving lives of real people and helping people through real, non-actor types, building real relationships, entertaining real people, or fulfilling that promise of real friendship would have been helpful in selling Jibo as a robot friend I can’t live without. there’s nothing worse, nowadays, thank fake news and manicured YouTube videos. All we see on the Jibo.com website are static images of smiling actors who have welcomed Jibo into their home. No matter. YouTube, Google and Facebook are the greates sales channels of all time.

However, the real social interaction features that should get the most website time are barely addressed: listening and recognizing. If Jibo had his way, you and Jibo will be Best Friends Forever (BFFs) before Jibo arrives on your doorstep in a colorful package with shiny reflective shrink-wrap. That’s what these companies should do: win friendships between consumers and their products instead of enforcing them upon us. Maybe Jibo should read the timeless classic, How To Win Friends And Influence People by Dale Carnegie. Build that book into your consumer robot’s AI and you’ll have a winner.

Jibo comes with 6 microphones. With its built-in “Natural Language Understanding,” Jibo will recognize from where a voice is speaking, identify the person and then turn to address the person. Facial Recognition will capture and remember your face through the Jibo camera which also snaps photos upon command which you can access through the Jibo mobile app. Your face goes into Jibo’s repository of human friends called the Jibo Loop.

I admit, that’s pretty cool, but who can put a price on friendship? Apparently the makers of Jibo can? Adding Jibo to your loop of friends will set you back $899. Someone would have to be desperate for a relationships to think they’ll get one out of Jibo. Jibo.com is mysterious and doesn’t quite sell the need to have Jibo as a personal home robot. There are other useful robot machines that will perform neat tricks for consumers like fold your clothes, teach you computer programming, and play watchdog. The operative question is on the Jibo.com website front page: “Hey Jibo, what can you do?”

“Jibo is designed to be a helpful, integrated part of your day-to-day life. Ask him where the nearest coffee shop is, what the forecast is for tomorrow, or if your flight is running on time. He also loves to make you smile – he can bust a move or crack a joke on command – and thanks to over-the-air updates, he’ll continue to surprise you with fun new tricks and capabilities. ”

Apple has Siri, Microsoft has Cortana, Amazon has Alexa, and Google has its Google Assistant. It seems to be Jibo wants to be a more personal, life-like version of these services with dance moves to boot. I think the company who makes Jibo tries too hard to sell Jibo as a home robot dance machine than as a real friend. Jibo’s “dance moves” are repeated as a feature three times on the front page of the Jibo.com website and I found a busta-move reference three other times elsewhere on the site. Great Jibo, you can dance, but can you tango? Isaac, was this what you imagined?