The reverberation of CES continues throughout the drone world with the Consumer Electronics Show solidifying its importance in the consumer market. What CES offers consumer drone companies above all others is its prowess to attract qualified partners, dealers and customers. Even if you work on the commercial side, you still should be attending CES if for nothing more than to know what’s happening on the other side of pendulum. One of the new drone exhibitors at this year’s CES was Autel Robotics. I had never heard of Autel, so naturally I had a few questions starting with, who is Autel Robotics?

On the last day of CES last month, the Consumer Technology Association released its numbers, all of which were records — 170,000 registered attendees with 50,000 international participants visited 3,800 exhibitors which consumed 2.47 million net square feet of exhibit space that showcased the latest wave of products, over 20,000, and technologies, over 20, that are connecting the world that gets ever smaller as CES gets ever bigger and could it get any bigger than it already is?

Amid the ocean of CES attendees this year was the Unmanned Systems pavilion where most of the consumer drone companies were organized. We tried to bring awareness to all of the CES consumer drone exhibitors by posting a CES Drone Guide which was tremendously helpful to our readers who attended and even those who couldn’t.

Autel was only one of many new companies participating at CES for the first time. It’s booth selection right next to DJI and Ehang’s AAV drone car at the entrance of the Unmanned Systems section helped to capture potential drone buyers. There are no bad locations at CES, only bad in-booth excitement. DJI, Yuneec and Ehang all did a brisk business in captivating the imaginations of droners, but it was Autel that should be applauded for its well-conceived plan to build a database of potential customers. Might not work for an established player, but it was an effective vehicle to launch a new consumer drone brand.

I attended CES with my two brothers. Both work in technology. My brother Jeff runs a successful ticketing website called ShowTixForU.com and Sean is a software engineer and consultant for a gaming security firm. Both reside in Las Vegas. We made a B-line for the drones pavilion only stopping at the Infinity Massage Chair booth to get a free full-body massage, one of the luxuries of attending CES. Afterwards, we continued to the drone pavilion and fell into the trap that was the Ehang 184. It was like entering a candy store.

One of the brilliant ideas of the Autel booth marketing to drive home product and brand awareness was the daily drones giveaways with my brother Jeff winning an Autel Robotics X-Star Premium on the first day, “valued at $1,000!” After entering the Autel booth area, we were invited by an employee to watch a 9 minute video for the chance of winning one of two X-Stars to be raffled at the end of each day, and by doing so we would receive a free Autel Robotics t-shirt. How could we lose?

That’s what’s known as win-win marketing. Rule #1: build excitement with a product giveaway and make people watch your drone in action to qualify. We entered a small theater within the Autel booth adorned with deliriously comfortable chairs. When the video started on the big screen in front of us, the chairs started to vibrate in sync with the bass of the video’s music. It certainly wasn’t the same as receiving a full-body massage from a chair, but it was still pretty cool.

The video was shot using the Autel Robotics X-Star, an affordable drone for intense aerial videography sessions. Rest assured, Rule #2 is not vibrating chairs. Upon exiting the Autel theater, we were greeted by another employee who handed out Autel t-shirts, but first made sure to scan our badges. Rule #2: capture contact data from every captive audience member.

Autel spent a small fortune on t-shirts. According to Natalie Cheng, Director of Communications, over 2,000 Autel Robotics branded t-shirts were given out at the booth and there wasn’t a single one to spare at the end of the show. “We gave away all 2,000 that we brought,” Natalie mentioned.

Since my brother Sean dragged me back to the Autel booth again, and again, so he could win an X-Star, I walked away with 3 bright red Autel t-shirts. Poor Sean was one number away from winning on 3 different occasions, but that brings up another shrewd condition of the marketing plan constituting Rule #3: make participants represent your brand to win. If you wanted to win, you had to be wearing your free Autel t-shirt when your number was called. One winner chose not to wear his Autel shirt and had it draping over his shoulder, and was booed incessantly by a hundred people who didn’t win.

One had a better chance of winning on day one. As you can see by the photos below, about 50 people were present for the opening day raffle. 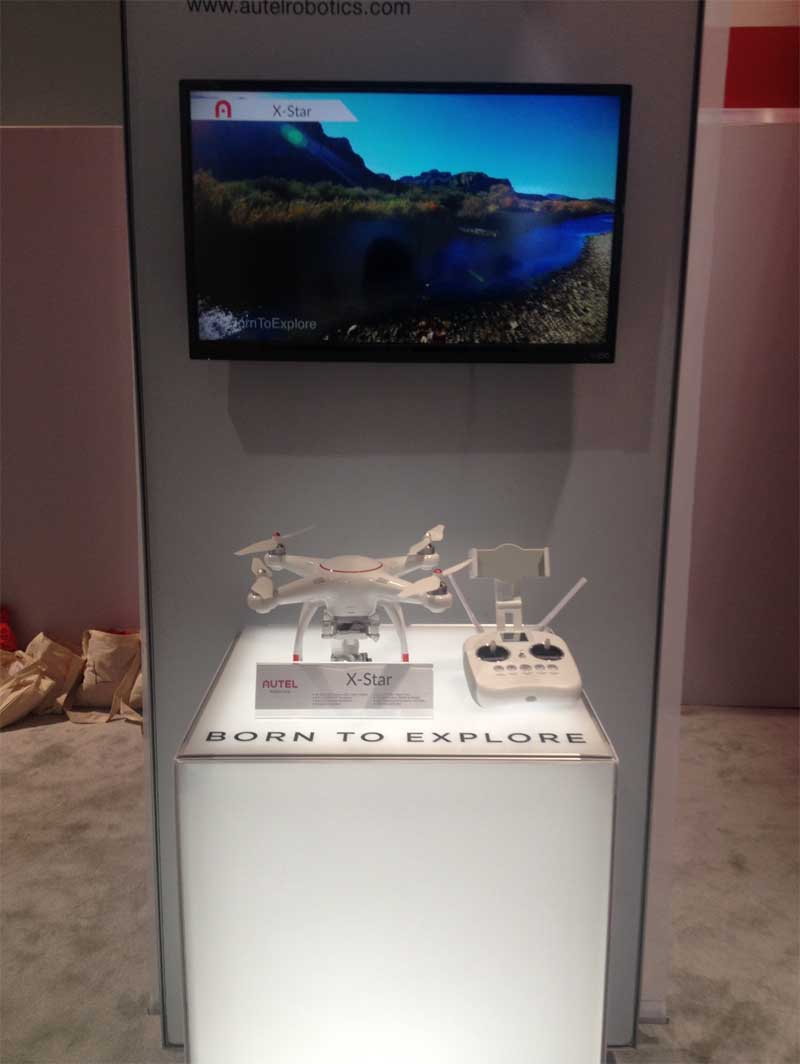 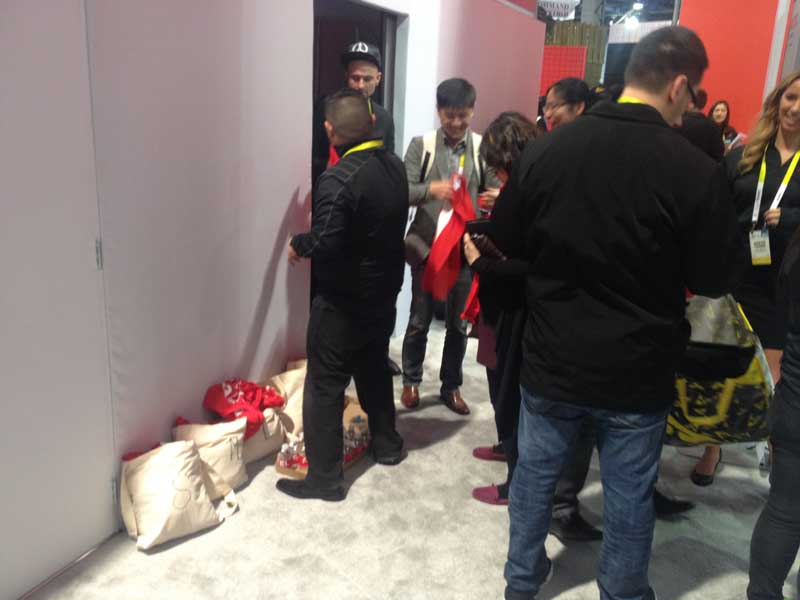 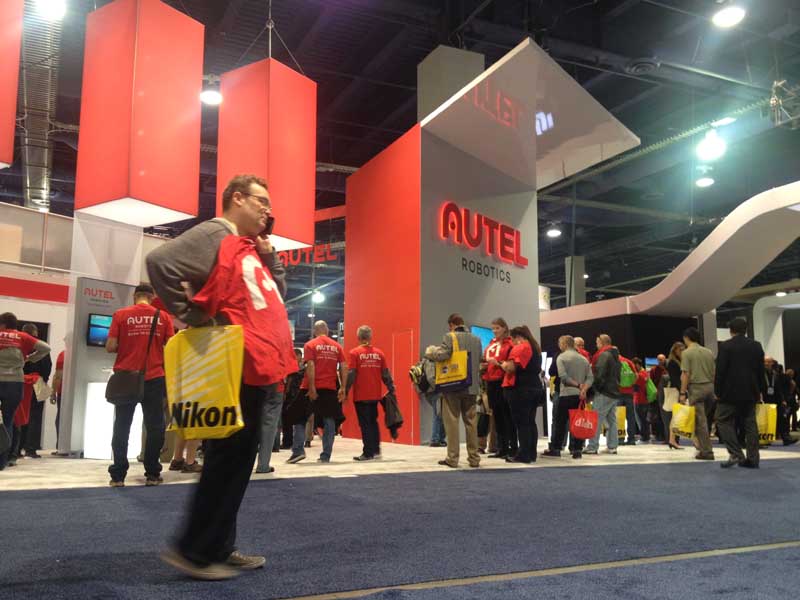 The winner just prior to the drawing.

Wearing an Autel shirt and reading Autel product literature while waiting for the Autel drawing. It works! 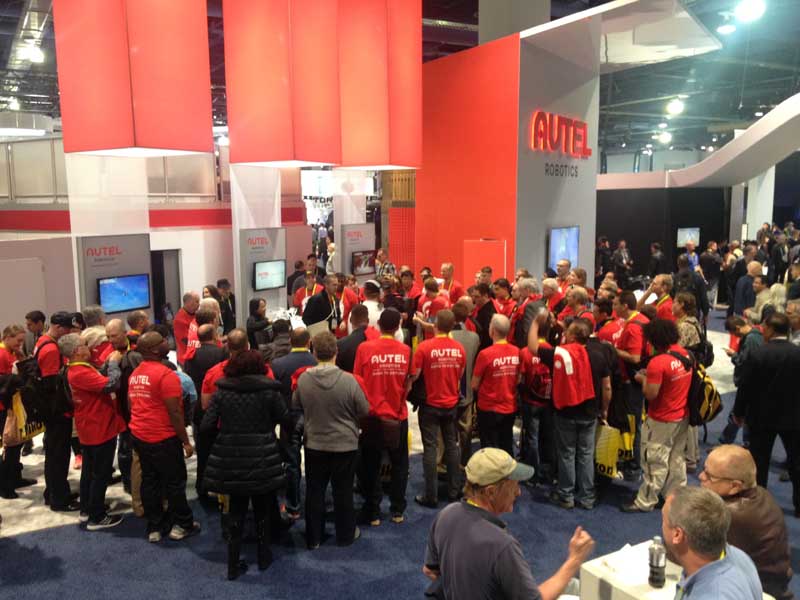 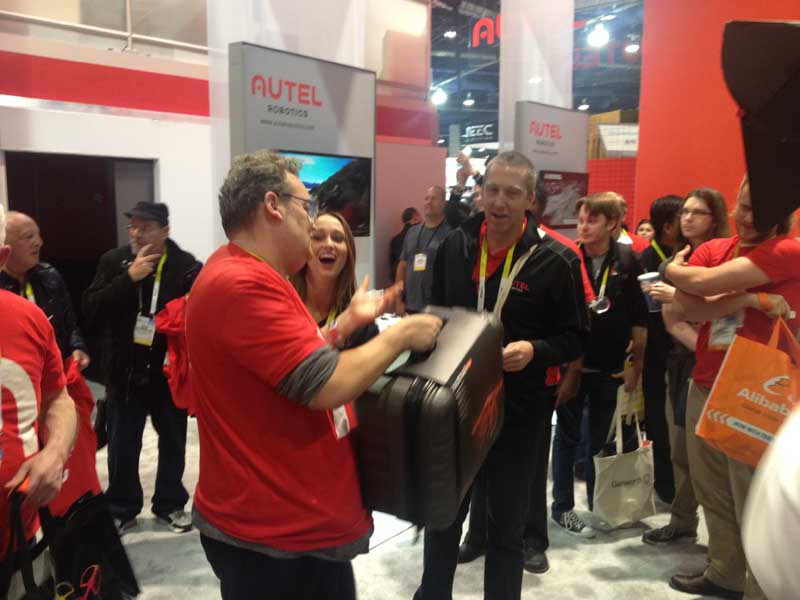 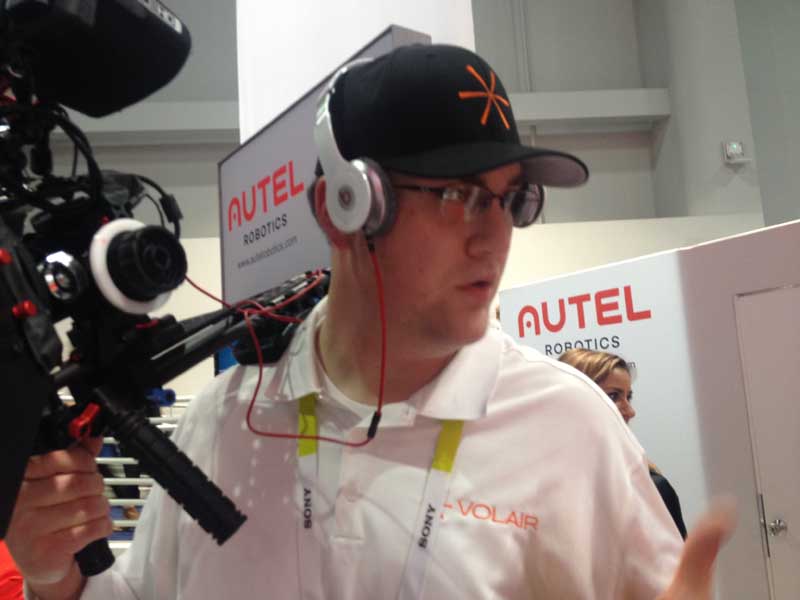 Graham Laing from Volair Media, a Seattle based video production company who covered the Autel booth for the company. 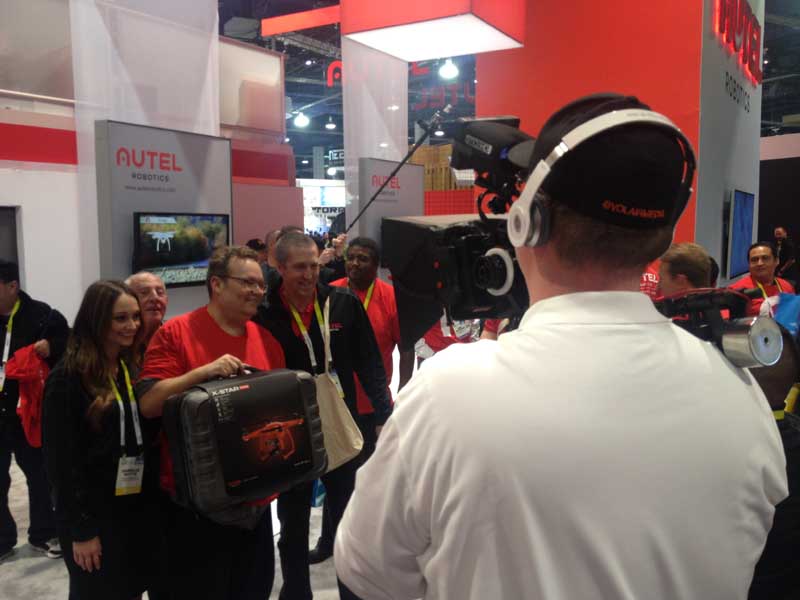 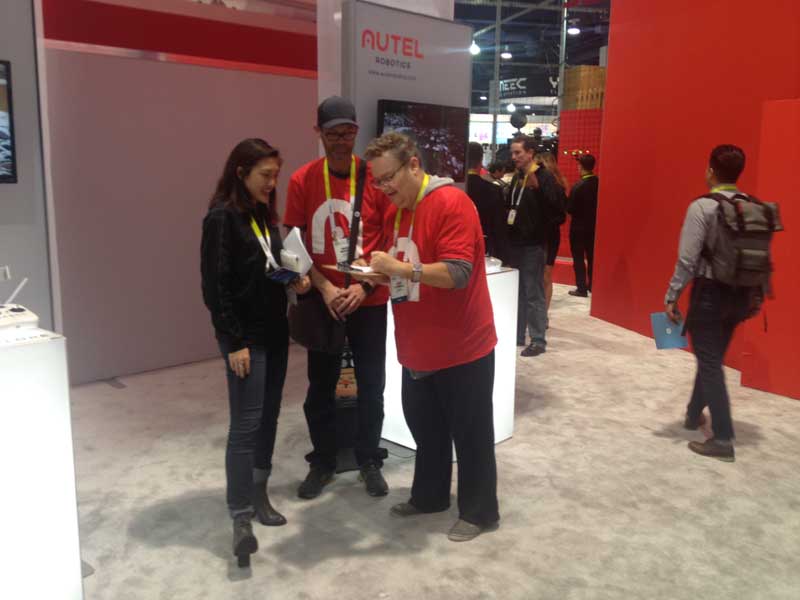 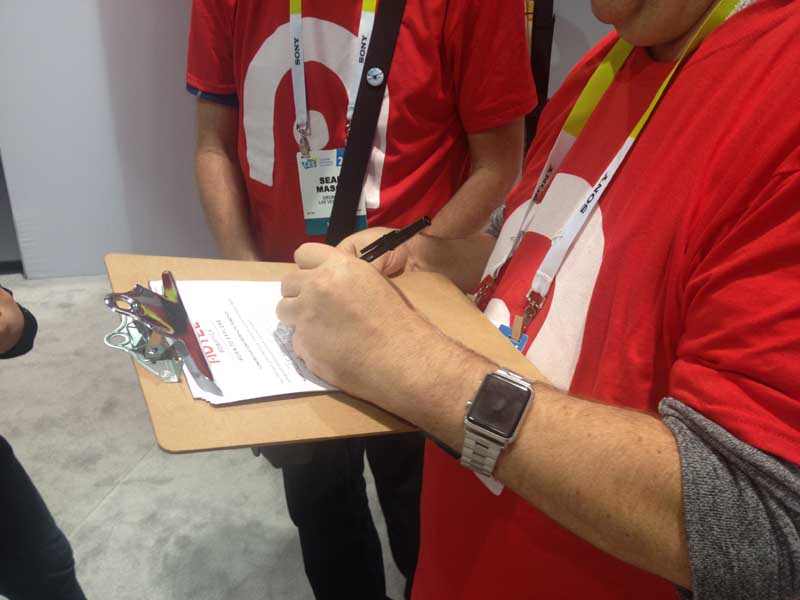 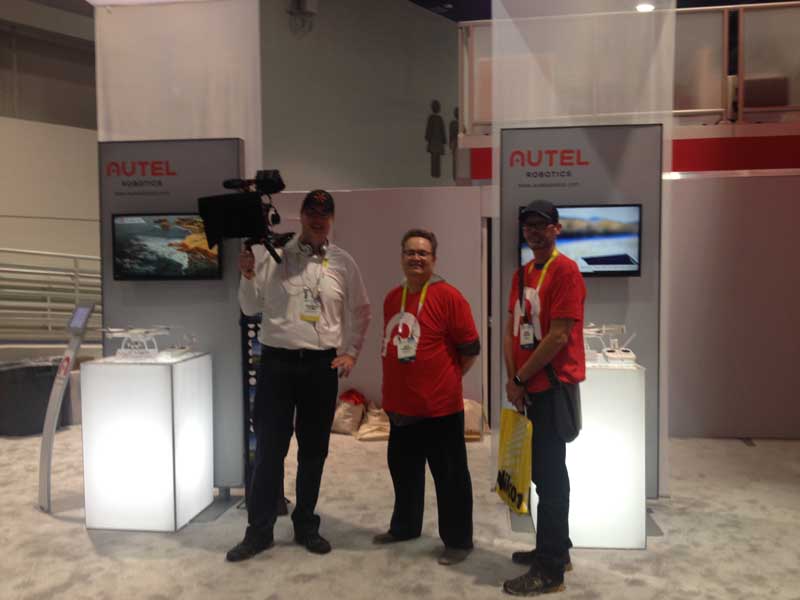 On day three of CES, after word of the Autel drone raffle was out, the crowds swelled to several hundred excited Autel t-shirt wearing crazies all salavating in anticipation for their number to be drawn. Rule #4: build the excitement so you end the week on a bang with lots of name recognition and people unforgetting your name. The video below only shows a small collection of those who attended the drawing on one of the two last days. It was a mad house.

With the overwhelming success of its CES marketing, the question remained for me. Who is Autel Robotics? I sent some questions to the new Autel Robotics USA CEO, Steve McIrvin, who came back with some answers.

DX: Who is Autel Robotics?

SM: We are a team of industry professionals dedicated to creating simple solutions with the best possible customer experience: our technology is backed by a rapidly-growing team of 150+ world-class engineers, and we are committed to providing top-notch, 7-days-a-week, US-based support for our customers. Our current product line is the X-Star series of camera quadcopters in the consumer drone space.

DX: Who started Autel, and where did the company start?

SM: Frank Li started Autel (Autel Robotics’ parent company) in 2004 in the automotive diagnostics industry and Autel Robotics in 2014 in Shenzhen, China. Shortly after that in 2015, Autel Robotics USA was established in the greater Seattle, WA area.

DX: The Autel CES marketing was brilliant! How do you believe the success of CES will translate into customers and sales?

SM: Glad you thought so! The idea was to throw our hat in the ring and make people aware that Autel Robotics is here, and we’re here with a superb product line and team in place to give people an equally superb customer experience.

DX: Can you describe the company’s product line including the X-Star?

SM: With this series, we really focused on functionality, safety and ease of use. For example, with the X-Star Go, you can not only get the first person view, but also in-flight access to GoPro camera controls using our free mobile app.

SM: With the X-Star and X-Star Premium, you get dual GPS and GLONASS outdoor navigation, the Starpoint Positioning SystemTM for precise flying where GPS signals are unavailable, and our exclusive SecureFlyTM magnetic interference protection technology.

SM: With all three models in the X-Star series, the remote controllers come equipped with one-touch action buttons so functions like taking off and landing or bringing the drone home are as simple as pressing a button. The controllers for the X-Star and X-Star Premium even have an integrated LCD screen that shows critical flight information, making it easy to fly even without the help of a mobile device and app.

SM: These are just some examples, and can find more information about product features on our website, AutelRobotics.com.

DX: What is the retail price for the X-Star?

SM: MSRP for the X-Star series is as follows:

DX: At the back of your CES booth you were displaying the Kestrel fixed wing drone. Was that a production model or do you or that shipping right now?

SM: We brought a prototype of Kestrel to CES. Although we are pretty far along in the development process – as you could see from the video, Kestrel flies and behaves the way it is supposed to, we are not shipping it yet. Kestrel could be game-changing, both for the drone industry and in other industries as well. That kind of innovation takes some time, and we always make sure we get the details right before releasing!

DX: What will retail price for Kestrel and does it come with software?

SM: At this point, we aren’t releasing any pricing information on the Kestrel.

DX: Since the company is based in China, you already have an international presence. What other countries will Autel target in the future?

SM: We’ll be in all of North America directly this year and will work with a few key partners who have global presence, such as Amazon. We’d love to hear from any readers that know about potential partners in South America, especially in the industrial space, so please reach out to our sales team if you have some opportunities you’d like us to consider.

DX: What new innovations is Autel working on in the future?

SM:Kestrel, the fixed-wing VTOL is a major innovation we have coming down the pipeline. While we are constantly researching and developing new technology and products to innovate and affect meaningful change in the world we live in, Kestrel is the only future product we’re really discussing at the moment.

DX: Where do you imagine the company will be in 5 years?

SM: We believe that over the next 5 years drones will be fully mainstream in the US and we’ll be a leader in both the consumer and professional areas. The exciting opportunities will be to see our products facilitate huge leaps of progress in geographies that have typically been behind the curve. Drones will be able to provide many shortcuts to advancing the overall quality of life in remote areas, especially as we develop more autonomy, such as a robust guidance system to intelligently see (and react to) moving objects, freeing up human pilots for other tasks. I’m personally excited by the delivery potential of our Kestrel platform for isolated communities that haven’t had access to modern healthcare or life-saving medicines. Our drones will usher in a new degree of independence and security for these people groups that choose a remote or nomadic way of life.